Leader of the Opposition V.S. Achuthanandan visiting a bitumin-mixing plant atKumbanad-Kadapra, near Kozhencherry, on Thursday 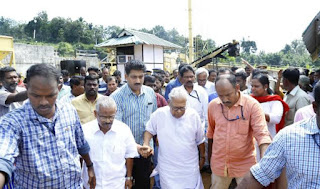 The problems faced by the common man due to a bitumen-mixing plant located in a thickly populated area adjoining a Scheduled Caste colony at Kumbanad-Kadapra, near Kozhenchery, will be raised in the Assembly, Leader of the Opposition V.S. Achuthanandan has said.

Mr. Achuthanandan, accompanied by Village Action Council workers, was talking to reporters after visiting the plant on Thursday.

The Village Action Council has been waging an agitation demanding the shifting of the plant from the thickly populated area for the past three years.

Mr. Achuthanandan said the controversial plant should be relocated to an uninhibited area, if the custodians failed to operate it without causing problems to the villagers.

He first visited the Chellathuparambil colony and interacted with the affected families there.

Panchayat ward member Jessie Sajan said the villagers had been put to much difficulty due to the noxious fumes emitted from the plant.

She said one person was killed due to asphyxia caused by the fumes from the bitumen-mixing plant in March and many others were hospitalised.

Though the villagers under the aegis of the action council staged satyagraha before the Koipram panchayat office for 48 days, the local body had given clearance to the plant, disregarding their protests, Ms. Sajan said.

Ms. Sajan has been elected as an Independent member representing the action council in the just-concluded local body elections, defeating both the UDF and the LDF candidates.

Ammini Mathew, Winnie Mathews, and Sanoop Rajan, villagers, told Mr. Achuthanandan that the plant had been causing breathing difficulties and allergy problems to the people in the locality.

Mr. Achuthanandan also interacted with the owner of the plant, Prasad, and asked him to take immediate steps to address the problems faced by the local residents.